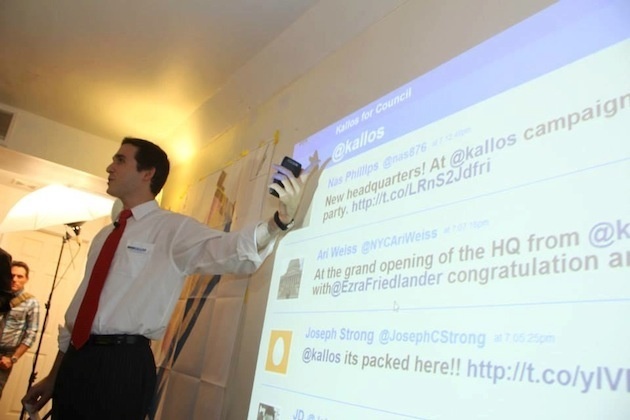 While other non-political institutions are busy tweaking their latest app's user interface, it almost like political institutions are still pondering font choices for their homepages. In New York, app contests have helped to maximize efficiency for a privately-owned transportation industry. Anyone with a smartphone can rent a bike or a car while ordering kosher and halal food at the same time. But most New Yorkers couldn't tell you which app is getting them excited about upcoming elections, unless of course they're referring to an article about Anthony Weiner's latest sext.

Turnout for local elections in New York City was 33.7 percent in 2010, according to Fair Vote. The representation index, which is determined by multiplying the voter turnout in US House races by the percentage of votes cast for winning candidates, has numbers that are even grimmer: 22.2 percent in 2006, 33.9 percent in 2008, and 21.4 percent in 2010. And while some apps and startups are looking to resurrect turnouts in future elections, most candidates still couldn't tell you how they work or why they might be necessary.

Benjamin Kallos is an exception. Kallos is a candidate for New York City Council's fifth district, which includes the Upper East Side and Rooselvelt Island, and has his sights on modernizing the electoral process. He's campaigning on a high-tech platform that he says aims to deepen technology's role in promoting transparency, inclusion, and accountability within pockets of New York City's voting pool that remain largely disengaged.

His platform consists of four "freedoms": the freedom to run the government, to study how it works, and to re-distribute and modify different versions of the same idea.

“Just because we came up with an idea that doesn’t mean that no one else can come up with a better version of that idea,” Kallos explained to me over the phone.

Kallos actually isn't alone. The city's Campaign Finance Board recently released a new app based on the Mobile Candidate Contribution Tool (pdf). The app, NYC Votes, allows candidates to better solicit and collect donations. After collecting funds through the app, candidates submit them directly and digitally to the CFB. Later this year, the CFB will release an engagement tool that will attempt to provide voters with applicable information on parties, candidates and elections.

Along those lines, Kallos created votersearch.org, a tool that allows users to check to their registration ahead of primaries and elections. After the tool was made available to the public for free it springboarded several other online electoral tools, such as registertovote.org.

“We’re really glad to see that happen” says Kallos, “there’s been coverage of other candidates taking our platform and using it as their own.”

One Bronx city council candidate commandeered Kallos' website, and forgot to change some of the content. According the Politicker, Kallos’s name was found more than three times on that site. All of votersearch.org's data comes from public rolls to begin with. Kallos also went to Albany, brought back all of the voting records and placed them in a searchable database online.

If I were running to represent a district like that of Kallos, I'd probably be just as optimisitc. An interactive map developed by WNYC, shows that the Upper East Side and Roosevelt Island are part of some of the districts with the highest voter turnout in Manhattan. The majority of people living in these areas are part of an affluent, well-educated, employed, upwardly-mobile voting pool. It's not at all far fetched, in other words, to say that many of Kallos' potential constituents have internet access and enough socio-economic acumen to ensure that their needs are attended to and their voices are heard.

Which is to say the narrative on the democratic permeation of technology into the Electoral College is gathering momentum as a political platform. Why? The prevalence of political institutions in daily life is withering away faster than you can say floppy disk. Accountability, transparency, and access--these factors are increasingly important, and it's certainly a good thing that they're being incorporated into the electoral agenda. Initiatives like that of Kallos' and the CFB are poised to re-engage the "disenfranchised" voter pools, as they should. The CFB are attempting to literally place the electoral process in people's hands with this app, but what about the rest of New York who can't download apps? Here's hoping they show up.